Tryin‘ to get by CD 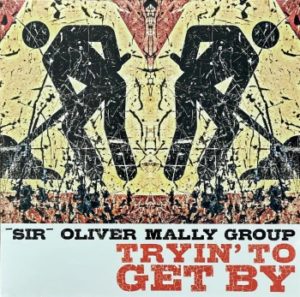 This is the English version of the review of Tryin‘ To Get By by the „Sir“ Oliver Mally Group at bluestownmusic.nl.

For over 35 years singer / guitarist “Sir” Oliver Mally, from the deep southeast of Austria, has been showing the European continent his unique version of the blues, while regularly crossing the boundaries of the genre.
His new album is in fact the follow-up to the album Uncut, that he released under the band name The Blues Messengers in 2017. The semi-acoustic album, played in addition to Mally, by double bassist Alex Meik and drummer Peter Müller, contained eleven songs mostly written by Mally.

Tryin ‚To Get By is an album from the band that now performs under the name “Sir” Oliver Mally Group in a slightly changed line-up, drummer Peter Müller has been replaced by the young Peter Lenz. It’s not just that change that makes Tryin’ To Get By a significant step forward from Uncut.
The songs of Oliver Mally, which far surpass the average blues(rock) songs both musically and lyrically, are on a number of songs from Tryin’ To Get By sober but beautifully colored by three guest musicians, the English guitarist / singer Ian Siegal, the Austrian Hammond B3 organist Raphael Wressnig and the German harmonica virtuoso Hubert Hofherr. Also because of their input, the nine songs on the album are raised to an unprecedented high level.

This is already evident in the swinging opening track I Wanna Ride With You with Mally on electric guitar, a driving rhythm section (Meik / Lenz) and beautiful solo work by both Wressnig on organ and Hofherr on the blues harp. Then there is a little slow down with the beautiful slow blues Downfall, a duet between Mally and Ian Siegal on both vocals and guitar.
Beautiful is the Tom Waits cover Get Behind The Mule, which, with an exciting semi-acoustic intro with beautifully restrained organ work by Raphael Wressnig, develops into a steamy boogie based on the rock solid rhythm section and the interaction between Mally’s exciting vocals and Wressnig’s virtuoso organ sound. Next is the introspective Tryin’ To Get By, the only song where the “Sir” Oliver Mally Group is not backed by guest musicians and a wonderful example of how the rhythm section, with the excellent double bass of Alex Meik, deepen Mally’s songs.
Follows the electric band sound of Bleeding Sunshine with a beautiful growling harp solo by Hubert Hofherr. A sound that continues in the Albert King cover Drowning On Dry Land in a perfect slow blues version with Oliver Mally on vocals as well as electric guitar in top form and Hofherr’s harp as his perfect counterpart (as both gentlemen have already proven with the duo album Overdue from 2019).

Superb is the performance of one of Mally’s most beautiful compositions Same Blood, which is given a blood-curdling rendition through the beautiful deep soul voice of Ian Siegal and the heavenly harp solo of Hubert Hofherr.
The album closes with the ironic blues Get Your Hands Off Of My Blues with the Hammond B3 by Raphael Wressnig in a leading role and the swinging bass sound of Alex Meik and the driving drums of Peter Lenz as the foundation.
As a bonus track on the CD and as a download for the vinyl version of the album, there is an alternate take of the beautiful slow blues Downfall, this time without the band, but purely the duet Mally / Siegal, which underlines the emotional eloquence of Mally’s songs.

With Tryin’ To Get By, Oliver Mally surpasses himself as a songwriter, who, with the help of his band and special guests Siegal, Wressnig and Hofherr, has found the definitive versions of his songs.

Tryin’ To Get By is a top-class record.